We expect household penetration will continue to increase in all regions but the Asia-Pacific and the Americas, where it will decline to 67 per cent and 48.8 per cent in 2023, respectively as a result of ongoing cord-cutting trends.

Markets in these regions, such as the US and Canada, have been experiencing declines in the last few years as an increasing number of customers ditch their traditional pay-TV subscriptions in favour of over-the-top (OTT) alternative video platforms such as Netflix, Amazon Video and Hulu. 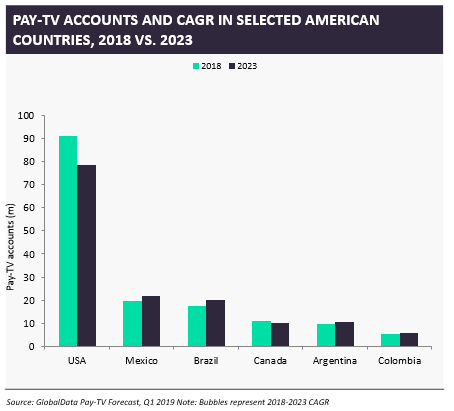 Although cord-cutting is not affecting Latin America as a region yet, we expect subscriber growth will decelerate in the coming years as customers’ appetite for on-demand content increases and new commercial platforms in the subscription video on demand (SVoD) market emerge. To slow the decline, traditional pay-TV operators are enhancing their video service proposition with OTT features and relevant content offers.

With the increasing demand for high definition and 4K content, OTT video and interactive pay-TV platforms, pay-TV service providers have been allocating significant investments to upgrade and expand their network infrastructure with fibre-to-the-home (FTTH/B), rollouts and cable upgrades. The commercialisation of 5G services with increased transmission speeds will bring new growth opportunities in the OTT video segment as well as increase competition levels in the fixed broadband and media/pay-TV segments. This will accelerate cord-cutting trends, particularly in the most mature markets.

Are you stuck at the application security starting gate? Applications su…

In this e-book, we’re tackling 7 essential vulnerability management questions to dispel all your doubts once and for all. This e-book is not only a consolidated source of answers to the top v…

MSPs are constantly looking for ways to grow their business by including more value-added services in their offering; cloud migration projects, hardware maintenance, new security services, and more…

When managed well, process improvement programs can fuel efficiency, engagement, profitability, innovation and growth. But how do you make sure you gain the necessary buy-in to kick start your proc…

We’re about to see a major shake-up in how people communicate within the workplace. Element is the pioneer of Universal Secure Collaboration. Now more than ever, organisations face challenges with …