GlobalData research has found the top IoT influencers based on their performance and engagement online.

Using research from GlobalData’s Influencer platform, Verdict has named ten of the most influential people in IoT on Twitter during Q3 2019.

Ronald van Loon is recognised as a top influencer of disruptive technologies such as IoT, artificial intelligence (AI), and big data. He currently works as the director at Advertisement, a consulting company dealing with data and analytics. He helps companies dealing in large volumes of data to generate more business value.

Ronald is of the opinion that internet of things (IoT) can increase the efficiency and scalability of organisations, allowing them to cut down on their costs and time. Additionally, he stresses that a combined application of AI and IoT can help meet the gaps in the production processes. IoT helps organisations to manufacture large-scale customised products, while reducing production time and costs, he opines.

Fabienne Neymarck is a reverse logistic manager at ascendeo France, a consumer electronics company. He provides transport relations to the INNOV8 group and has been involved in the pilotage of service providers, including invoicing, implementation of projects, and providing quality service.

Fabienne is a top influencer in technologies such as big data, AI, IoT, cloud, machine learning, data security, and blockchain. He speaks extensively on the evolution of information technology system management, AI, and IoT.

Evan Kirstel is a social media influencer who helps clients to leverage social media channels to improve sales and networking. He has worked with companies such as AT&T, Samsung, and Qualcomm to improve visibility across social media.

Evan tweets on various technologies such as AI, big data, IoT, predictive analytics, and cognitive computing. He believes that a combination of these technologies can help in the early disease prevention and diagnosis.

Evan has extensive experience in the areas of sales and business development across the information technology and telecom domains, coupled with an interest in mobile technology and cloud. He also serves as an advisor to start-ups and promotes disruptive technologies to organisations and service providers.

Mike Quindazzi is the managing director for the South Pacific region at PricewaterhouseCoopers. He is a technology influencer who believes that IoT deployments are growing at a rapid pace, with several manufacturers developing and selling IoT products, services, and customer-managed platforms.

Mike works with companies to help them grow in areas including digital transformation, customer experience, and implementation of complex HR/ERP systems. He applies emerging technologies such as IoT, big data, and AI to create opportunities for his clients.

Tamara McCleary, CEO and founder of Thulium, is a tech futurist and a top influencer of technologies including AI, robotics, and IoT.

Tamara believes integration of AI with IoT will have a phenomenal impact on business in the next five years. She has developed the RelationShift® method, which helps in improving workplace relationships virtually leading to improved performance and harmony. 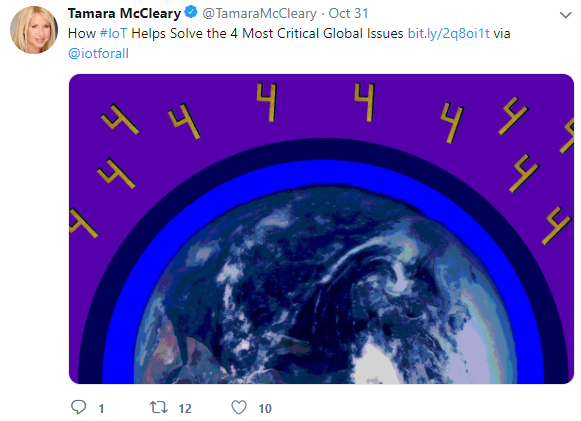 Dr Kirk Borne, a data scientist and executive advisor at Booz Allen Hamilton, is engaged in research and consulting in various technologies. He specialises in data science, data mining, and analytics.

Kirk believes that the large volumes of data streaming from products, people, and processes can be used to create learning patterns. He refers to IoT as ‘internet of context’ for AI applications, as most of the contextual information is coming from devices and sensors. He believes that this raw data can be integrated with machine learning predictive algorithms to deliver forecasting-as-a-service to systems, processes, and applications.

Diana Adams is a technology journalist and co-founder of Adams Consulting Group, an IT consulting firm established in 2001. She is one of the top influencers in technologies such as AI, IoT, cloud computing, big data, digital marketing, and machine learning.

Diana has more than 5,000 publications to her credit including ‘The Journey to 5G: Preparing for Mobile Broadband Transformation’, and ‘Global Connectivity and the Digital Economy: A Comparative Analysis’. She opines that telecom operators will have to be better equipped to support the proliferation of IoT applications with the emergence of low latency and high bandwidth networks.

Antonio Santos is an innovation broker who collaborates regularly with the Siemens group and is a member of their influencer/challenger programme. He is regarded as a leading social media influencer on digital transformation, future of work, augmented reality, connected home, and security. 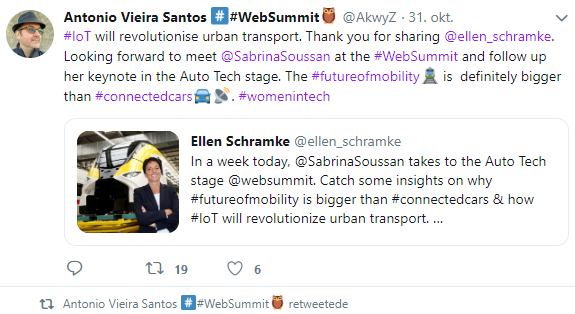 Glen Gilmore is an independent social media and digital marketing consultant. He has been ranked as a top influencer in digital transformation, emerging technology, and travel.

Sandy Carter is the Vice President at Amazon Web Services. She helps companies leverage their Microsoft assets and has received more than 25 social media awards for her innovative social business techniques.

A pioneer in digital business revolution, Carter has been the driving force behind IBM’s innovation strategy in the last decade. As IBM’s global General Manager of Ecosystem Development, Sandy helped enterprises connect with accelerators and emerging technology companies to foster creativity and innovation.